Candida auris is an emerging yeast that is causing numerous outbreaks in health care settings, and life-threatening infections in patients worldwide.1 Most isolates of C. auris are multidrug resistant. 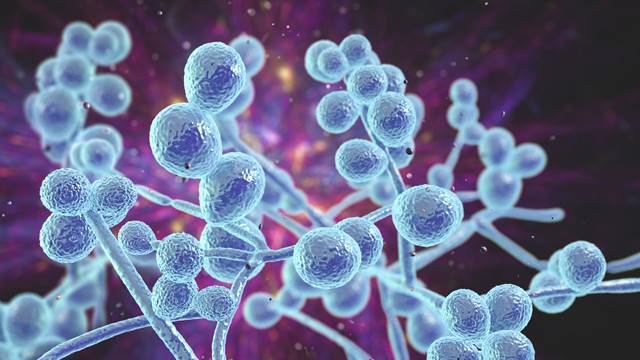 Candida auris is an emerging yeast that is causing numerous outbreaks in health care settings, and life-threatening infections in patients worldwide.1 Most isolates of C. auris are multidrug resistant. In the United States, 85% of isolates have fluconazole minimal inhibitory concentration (MIC) values >64 µg/mL, 33% have amphotericin B MIC values >1 µg/mL, and 1-3% have FKS mutations indicating echinocandin resistance (CDC, unpublished data). Although an echinocandin is the Infectious Diseases Society of America (IDSA)-recommended initial therapy for Candida bloodstream infections, echinocandin resistance is increasing in C. auris2 (CDC, unpublished data). Treatment with liposomal amphotericin B could be considered when an isolate has both fluconazole MIC >32 µg/mL and an echinocandin MIC >2 µg/mL.

There are several challenges with amphotericin B susceptibility testing of Candida species but especially for C. auris. Firstly, there are no CLSI or US Food and Drug Administration (FDA) breakpoints for amphotericin B and any species of Candida. Based on a single small study, clinicians use the MIC value of ≥2 µg/mL as the resistant breakpoint for all Candida species despite the paucity of scientific data to support it.3,4 There has been little problem with this cutoff as the majority of Candida species have MIC values <1 µg/mL.5 In 14,000 Candida bloodstream isolates collected during US candidemia surveillance 2008-2018, fewer than 10 isolates of all species combined had an MIC value >1 µg/mL (CDC, unpublished data). This has not been the case for C. auris as up to a third of US isolates have an MIC value of >1 µg/mL. With only a suggested susceptible breakpoint and no intermediate breakpoint, the margin of error of ± 1 doubling dilution leads to “essential agreement” but “categorical disagreement” for isolates with MIC values of 1 µg/mL (susceptible) and 2 µg/mL (resistant). The second challenge in amphotericin B testing is the difference in MIC distributions across testing methodologies. Broth microdilution (BMD), including Sensititre YeastOne, produces a narrow range of amphotericin MIC values (0.125-1 µg/mL), while gradient diffusion gives a wider range and lower MIC values (MIC50 and mode 0.6 µg/mL).3,6 (CDC, unpublished data). Again, for most Candida species, since amphotericin B values are typically <1 µg/mL by both methodologies, the two methods achieve high “categorical agreement.” But because so few isolates with MICs >1 µg/ mL have been tested using different methodologies, it is not clear which methodology provides the more accurate detection of “resistance.” In M27-Ed4 CLSI states for amphotericin B, “Some research has suggested that commercially available methods may provide a more accurate interpretation of the in vitro MIC.”6,7 This not-so-subtle hint from the CLSI Subcommittee on Antifungal Susceptibility Tests subcommittee suggests Etest, at least in studies reported nearly 30 years ago, was more reliable for testing Candida species and calls into question which is the more accurate methodology for amphotericin B antifungal susceptibility testing. For C. auris, the other widely used commercial method for susceptibility testing of amphotericin B, the VITEK 2®, is more likely to report isolates having amphotericin B MIC values >2 µg/mL when compared to both agar gradient diffusion and the CLSI BMD method.8,9

In summary, as stated above, amphotericin B MIC determination for Candida species has never been a clinical laboratory conundrum because there were so few isolates with MIC values so close to the suggested susceptible breakpoint, independent of the testing methodology. Now that C. auris has emerged, amphotericin B testing has jumped into the spotlight. There is significant variability in MIC values for C. auris and amphotericin B depending on the test method used. While both the CLSI and European Committee on Antimicrobial Susceptibility Testing (EUCAST) promote BMD as the reference methodology, only EUCAST has developed breakpoints for some Candida species. These are ≤1 µg/mL for susceptible and >1 µg/mL for resistant.10 However, there are no breakpoints (for any antifungals) specifically for C. auris. Furthermore, there are no studies that show a direct correlation between MIC values and clinical outcomes for amphotericin B and any species of Candida. Hence, amphotericin B susceptibility results for C. auris should be interpreted with caution, particularly for treatment of multidrug-resistant C. auris infections, and laboratories should share this note of caution with providers when reporting amphotericin B.